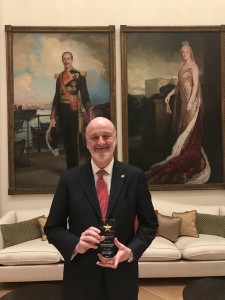 Ambassador Gil-Casares spent 13 years in the United States. His profound understanding of the American and Spanish cultures enabled him to build new and lasting bridges between the two countries. His tireless dedication to the development of ever stronger bonds between the nations is greatly appreciated and will be remembered in years to come.

The Farragut Award, recently created by USEC, is given to individuals that have shown an effort above and beyond the call of duty to foster relations between both countries. For the 2017 edition, the board of USEC selected Ambassador Gil-Casares, who received the award in a private ceremony on March 23rd just a few days before returning to Spain at the end of his term.

“The Ambassador and the whole Embassy’s efforts to support USEC and our objectives have been most generous and effective. The Farragut Award is a small measure of the recognition they deserve,” declared Gonzalo García, president of USEC.

Martín Gurria, board member and award committee director, was also part of the ceremony. “The Farragut Award honors the Farragut family and
its service to our nation: Jordi (George), a native of the island of Menorca, Spain and his son David. The Farragut Award epitomizes the true joining of spirits between Spain and the U.S. Jordi, fought for America’s freedom and independence in the Revolutionary War. David, a proud naval lieutenant, became the firstnaval officer to hold the rank of full Admiralin the U.S. Navy due to his valor and commitment to the new nation. USEC’s goal is for this award to shed light on the Farraguts’ amazing patriotic example as well as on the U.S. Navy and its brave sailors. It’s a true inspiration for all Hispanics and the American people,” said Gurria.

“Ambassador Gil-Casares is a great friend of the Spanish-American community in Washington DC, he will be deeply missed”, said Jose Montero, another member of the board of USEC who participated in the ceremony. 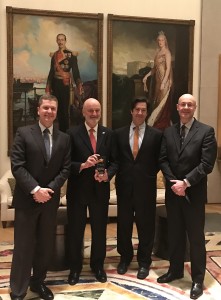 March, 2017 Newsletter which includes an interview with Victor Sierra, Chairman and CEO of Everis USA, as well as links to a few articles and news that should be of interest for our community. 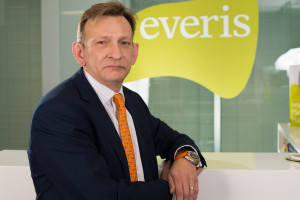 Víctor Sierra is the chairman and CEO of everis in the USA and also manages the HR function in the Americas region. everis is a global management consulting, IT, and outsourcing professional services firm doing business with a comprehensive array of industries, including, banking and financial, insurance, federal government, healthcare, and utilities. Victor came to the US from Spain in 2010 to start everis USA.

USEC had an opportunity to hold an exclusive interview with Victor to obtain a better understanding of how everis landed in the US and the challenges they have found developing their business in this country. Don’t miss the Full Interview.

February, 2017 Newsletter which includes an interview with Mr. Manuel Murga, Chief Operations Officer at Acornseekers LLC, as well as links to a few articles and news that should be of interest for our community. Mr. Manuel Murga is the Chief Operations Officer at Acornseekers LLC. He has been involved for more than thirty years in the production of Ibericus Pig in Spain, and this is one of his biggest passions. Acornseekers brings the tradition of Ibericus Pig (Jamón ibérico) to the USA, not by importing high quality ham from Spain, but instead by raising the pigs in Texas in a similar environment.

USEC had an opportunity to hold an exclusive interview with Manuel to obtain a better understanding of how this company was created and the challenges they have found. Don’t miss the Full Interview.

The US Spain Executives Community is a non profit organization founded in Washington DC in 2014 by a group of businessmen, executives and entrepreneurs. It has more than 170 formal members, leaders from the public and private sector located in multiple cities in the US and Spain. … END_OF_DOCUMENT_TOKEN_TO_BE_REPLACED